Since its introduction, Cardano, led by Charles Hoskinson, has become a major altcoin (alternative coin) in the crypto-verse. For those still not in the know, Cardano is a third-generation blockchain that is slightly different from Ethereum, Bitcoin and all the rest. The difference is the programming language that Cardano runs under is similar to the language used in high-profile industries such as military infrastructure. This makes Cardano highly valuable and a popular option in different industries.

Cardano went with the slow, methodical, academic approach using peer review anonymously submitting numerous papers to universities which were eventually selected. Not an easy feat. Other crypto currencies went with the “move fast and break things” approach to obtain a greater network effect but might not last. It’s the classic case of the tortoise vs the hare.

Cardano is a highly rated altcoin and the rating is expected to go even higher with the adoption that is anticipated in the near future. It has been hovering around the #10 spot on CMC (Coin Market Cap) for a while but I see it reaching top 5 in the next year or two. If you are wondering whether you should invest in Cardano and whether it’s a good investment in the long-term, I’ll give you my two cents. Keep in mind that I’m highly biased and bullish on this project and have been active within the Cardano community for over three years. This by no means is financial advice. I would obtain 10 different opinions before investing your money in ANYTHING. Do your own research! And…don’t invest what you cannot afford to lose.

Cardano was developed to address three major problems that all other projects in this space are facing. (I won’t get too technical.)

1. Scalability – The Hydra protocol is a second layer solution that is there if we need it. If one day Cardano is verifying as many transactions as Visa or MC, we’re good. In fact, Visa currently handles ~1700 TPS (transaction per second) and is capable of ~45k TPS. Meanwhile, Cardano will be able to handle one million TPS if needed. Wow.

2. Interoperability – There are over 2000 cryptocurrencies and they’re all dumb, deaf, and blind. Currently, they cannot exchange value to one another. Imagine if there were 2000 different WiFi’s and you check into a hotel and you’re not able to connect to their WiFi because they support WiFi “x” and your device supports WiFi “b”. Meanwhile, the gym across the street supports WiFi “p”. It would be a nightmare. On Cardano’s platform, different currencies will be able to interact with one another. Problem solved.

3. Sustainability – How do you create an environment that IS NOT centered around one entity and have it live and prosper forever? It’s about a governance structure that has incentives (rewards) for the people who join and help the network perform and live on. This is where decentralization comes in. It’s like breeding a bunch of birds or bees and setting them free. They are now “decentralized”. There is no stopping them. They’re out there! The same goes for cryptocurrency. Giving the power back to the people.

Those three reasons are why it pays to do your homework rather than quickly launch a mediocre project. I believe Cardano is now 3-5 years ahead of any other cryptocurrency.

ADA – the ticker symbol for the currency that is run on the Cardano blockchain.

The first-price action of Cardano came in late 2017 which is an indication that the altcoin is still in the discovery phase of its actual market price. Fancy way of saying Cardano is extremely undervalued! It was also undervalued during the famous bull run of 2017 where the price shot from $.02 to $1.33. Now three years later, we’re back in a bull market and there’s a lot of speculation of another parabolic move in the next 18 months where Bitcoin might exceed $20k or even $50k. Keep in mind that when Cardano hit it’s ATH (all time high), it wasn’t a working protocol. It was basically an idea that was dragged up 6550%! Can you imagine what might happen this time around given that Cardano will soon be the best and most decentralized in the space? I’m expecting positive price action even without any bitcoin influence, but everything is still coupled to Bitcoin so I’m happy to take that ride.

Cardano originally promised the decentralization part of their roadmap (Shelley) in 2018 but never delivered. In fact, this was delayed for over 2 years! (Look below.) This left a lot of investors and traders pissed off and now, non-believers are calling Cardano a scam in retaliation for losing their money. The price eventually fell back down to under three cents. No one is ever happy to buy at the top and then see a downtrend. So, you have the bitter people and you have the people that truly believed in Charles’s vision and saw this as a two-year accumulation period. I’m thanking my lucky stars that my net cost average is $.032 and I had time to keep buying at those levels!

Currently, Cardano is hovering around $.08 which is still an incredible bargain based on where it’s been, what it has done and what is still to come.

The second and most anticipated phase of Cardano’s road map will now launch end of July 2020. Before that, on July 2nd and 3rd, is the Cardano Virtual Summit, Shelley Edition. With all the high-profile speakers and media outlets that will be attending, I believe the world is about to find out what Cardano really is and what it stands for. The news will spread, and people will buy. Most will purchase ADA for staking purposes and passive income. I’ll get to that. I’d highly recommend tuning in to see speakers such as Vint Cerf, the father of the internet. I’d say the future looks bright if you have one of the men who invented the internet sharing your vision.

Staking goes live on the main net July 29th, 2020. This is where we, the people, take the reins. You may delegate any amount of your ADA that you purchased into a stake pool and earn rewards for doing so. You are part of the movement. You are assisting the network. Considering that the test net was a huge success with over 1000 stake pools created and over 20,000 wallets actively participating, I suspect those numbers to skyrocket towards the end of summer. This will obviously dry up any sell orders because why sell an asset that pays you to hold it?

The test net averaged around 10% ROA (return on ADA) and as you can see using the Cardano Staking Calculator, that is a damn good return given that traditional markets get you 2-3% back. The great thing about staking, and crypto in general is that the currency never leaves your wallet (look into Daedalus and Yoroi). You’re in 100% control of your funds. The bank cannot seize them nor freeze your account. You do not have to wait a week for a wire transfer and do not have to pay an arm and a leg to transfer funds. No middle men whatsoever.

Now we get to the fun part: The theoretical prices and passive income scenarios 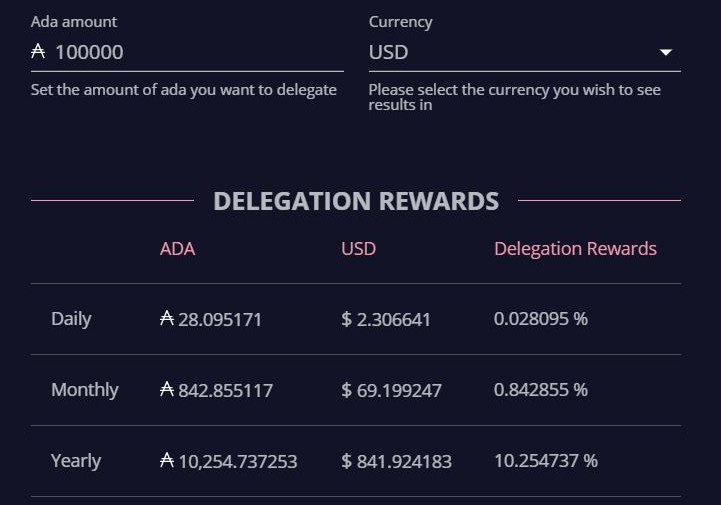 So, you can see why more traditional investors might want to enter this space.

In this scenario, I’ll use 3 Million ADA at the price of $.03 which is an investment of $100k which is not too far-fetched for most millionaire investors who are skilled at buying at low prices. Or it could be people pouring their life savings into ADA. Anyhow, there are many whales out there and I suspect a lot more to come. See for yourself!

You’ll see that if or when ADA hits $1 (which is conservative), this will bring in over $300k in annual rewards or $25k a month! Keep in mind that this is based on $1 price. Even at the current price (.08), an extra $25k a year can help out A LOT! The price could easily hit $2 or $5 or $10 in the years to come. If you’re considered a “Cardano Whale”, and the price spikes, you basically have similar options to the lottery.  Sell all for a lump sum or take the annuity payments and STILL have your original investment! Win win! 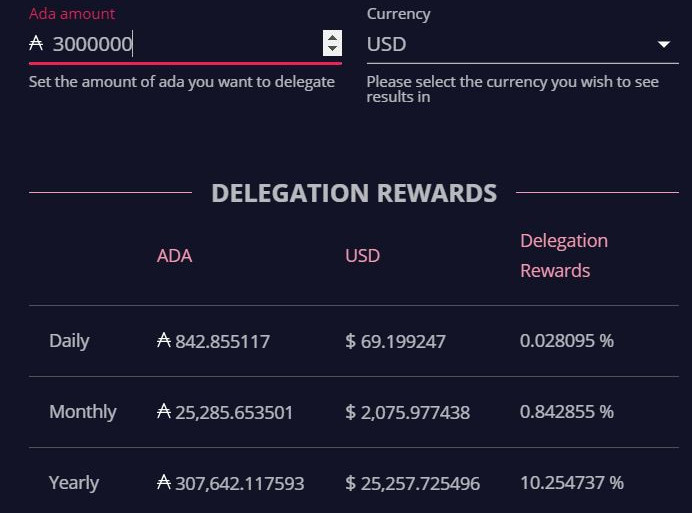 Now that you understand why so many people might want to buy ADA and start staking, there is also a rumored Coinbase listing around the corner. Coinbase is the most prominent digital currency exchange in the United States. It lists many coins like Cardano with fiat currencies in approximately 32 countries, and bitcoin transactions and storage in 190 countries worldwide. When a coin gets listed on Coinbase, the price usually pumps. Take a look at what happened to these other coins. 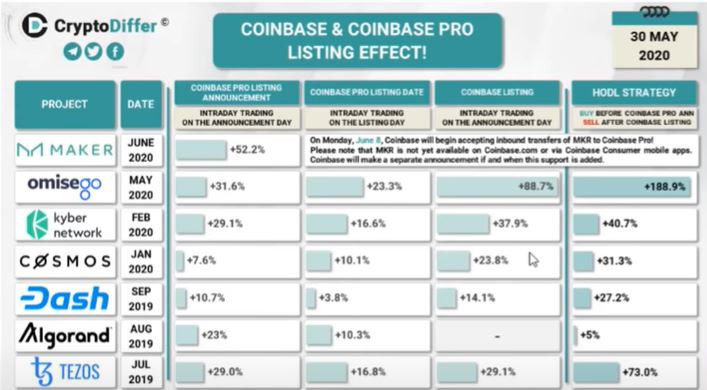 I suspect a Coinbase listing by the end of 2020.

Is Cardano a Worthy Investment?

You tell me. The price at the time of writing this $.081. They have a major event happening in 10 days, followed by a highly anticipated launch of Shelley, where people can start earning passive income, AND an inevitable Coinbase listing. All this NOT considering Bitcoins movement! If in fact we are in a bull market and Bitcoin does approach an ATH next year, there’s no telling what price Cardano can reach. Could be the perfect storm. Some are calling for ADA to reach a few dollars next year! No one knows but I’d rather be in a good position just in case.

In my opinion, since Cardano is relatively young, investors should use the opportunity to enter early and be among the few who will enjoy the future, bullish projections of Cardano. 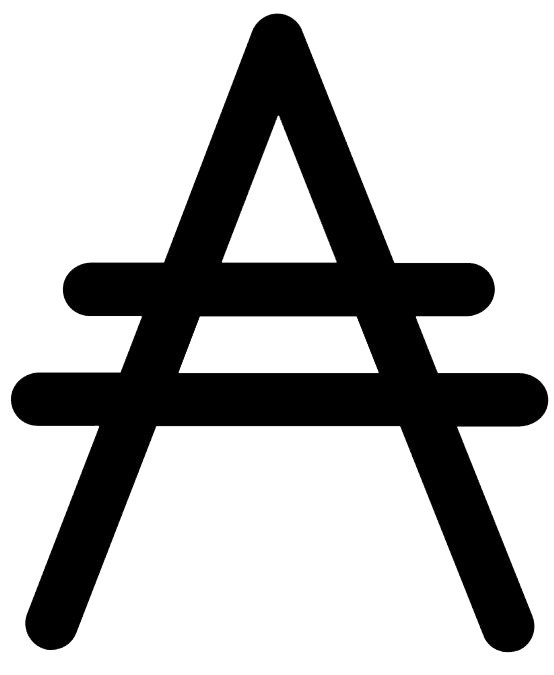 6 thoughts on “Cardano for Dummies”